Dan Di-Lieto 26 Jun 2020
For many people their football club is their life - a constant social outlet they depend on which has shaped multiple generations of families. Clubs have (consciously or not) developed responsibilities beyond simply winning football matches and the importance of their role in society has come into even sharper focus in recent months as a result of the limitations imposed on us by COVID-19.
The football industry as a whole continues to bear the brunt of public scrutiny around what it “gives back” - a more recent phenomenon linked to the influx of money into clubs - particularly top teams - in the past 15 years. Such scrutiny ignores the fact that the majority of clubs have been in the same area for over a hundred years and are often the building blocks on which communities have grown both physically and socially - in sharp contrast to other businesses of similar financial scale and reach. Criticism tends to focus on the headline sums of money which flow into clubs (especially the proportion that goes to players) without consideration of the wider role of clubs within their local communities.
When it comes to the interaction between football clubs and the planning system it becomes critical to challenge this narrative and communicate the real socio-economic benefits of clubs and stadia so that they can be given full and proper consideration by planning authorities and in the court of public opinion.
In the first blog of this series, my colleague outlined the example of the case put forward for the new Riverside Stand at Fulham Football Club. Lichfields used our Evaluate model to prepare a bespoke infographic (below) highlighting the community benefits of local investment, employment opportunities, improvements to local community facilities, continued support of local charities and other initiatives run by, or affiliated with, football clubs.
Figure 1 Lichfields’ Infographic: Economic and Social Impacts of Fulham FC Pre and Post New Riverside Stand This type of project, by a club at their own stadium from which they have operated for over 100 years, can be considered a traditional example of football stadia development in one sense. The approach adopted to promote the scheme focuses on the established relationship between the club and local community and the long term socio-economic benefits which would arise from the new investment.
When trying to further define the role that football clubs play in communities it is helpful to explore case studies which depart from this standard model. Lichfields has advised The FA on planning matters in respect of Wembley Stadium for over 20 years and have promoted a number of the community initiatives linked with the venue over this period. A recent example of this can be seen through Tottenham Hotspur FC’s (THFC) temporary occupation of Wembley Stadium during the 2017 and 2018 seasons. As a result of restrictions on the original permission for the stadium, Lichfields worked with THFC to seek consent to increase the number of full capacity events that could be held to cover their home matches for this period. As part of this process THFC undertook to ensure that they could offer the same benefits to the local community in Brent that they have done for decades in Tottenham. 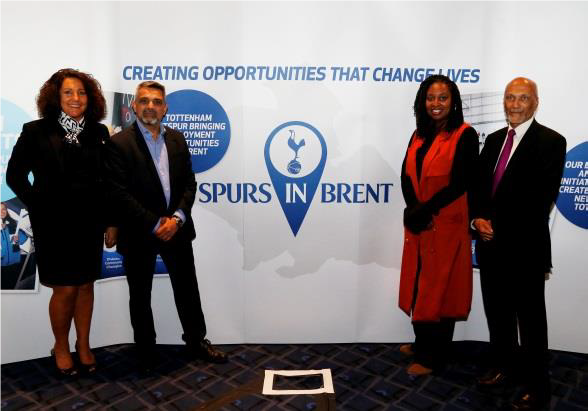 This initiative was spearheaded by the Tottenham Hotspur Foundation and was spread across a number of areas including employment, education, sport, health, wellbeing and community & social cohesion. The key highlights of the initiative were:
In addition to this THFC put in place a legacy programme for the Borough to continue the delivery of the volunteer kiosk model for all England matches played at Wembley and so that the Wellbeing 4 You initiative will continue to be delivered at full capacity.
Such activities are representative of the types of initiative undertaken by many clubs at every level of the footballing pyramid and illustrate how closely intertwined they are with the needs of their local communities. Both Fulham and THFC have their own charitable Foundations which drive investment and involvement locally but such support is proffered by every club. My local team Stevenage F.C. are struggling on the pitch (currently bottom of the fourth tier of professional football) but have been running a Coronavirus Community Careline to help local residents who need help whilst in self-isolation.
Whilst it may seem that no number of good news stories can outweigh the cold hard numbers of what top players earn on a weekly basis, the break from on-pitch activity during the COVID-19 outbreak has helped to shine a light on what clubs and their stadia give back to communities. The challenge for football clubs moving forwards will be to adjust to the new economic reality and there are already indications that the bubble has burst (at least for now) on high transfer fees and wages. This provides a stepping off point to consider how a more holistic approach to stadia (looking beyond football) can be employed to support individuals and businesses that will struggle in the coming months and years.