Summer appetiser: Revised NPPF published with a few changes from those consulted on

Summer appetiser: Revised NPPF published with a few changes from those consulted on

Tom Davies & Jennie Baker 22 Jul 2021
On 20 July, the Government updated the National Planning Policy Framework (NPPF) to much fanfare, alongside the publication of the National Model Design Code (NMDC) and launch of an Office for Place.
These are more changes to the existing system, so more of a policy filler before the main planning reform event.

The key changes in policy are those given most property press coverage - requirements related to design and changes to the national policy considerations to be taken into account when seeking to remove permitted development rights for change of use to residential. The new national policy requirement for local plans to look 30 years ahead where large scale development forms part of the strategy is an important change too.

Apart from transitional arrangements relating to this new requirement for 30 year vision, the new and revised policies came into force immediately.

Background and Aim
The background is that in January, a year on from the publication of the ‘Building Better, Building Beautiful’ Commission’s report, ‘Living with Beauty’, the Government issued its response, setting out where it will take forward the Commission’s recommendations. Accompanying the report was a consultation on the proposed amendments to the NPPF and the content of the newly published (then draft) National Model Design Code and accompanying guidance note.
Tom Davies covered the key changes in his February blog “Design-led - but a variety of NPPF changes are proposed”.
As Tom noted, while the press release and headlines focus on design quality and ‘Beauty’, the revisions to the NPPF cover a broader range of issues, with the Government also consulting on amendments to policies on sustainability, flood risk, and biodiversity; Article 4 Directions; protection of the historic environment; and minor changes which remove now out-of-date references within the Framework.
Almost all of the changes proposed have been taken forward.  And where there are changes to the text consulted on, it is not a wholesale change in approach.
The key changes are explained below.

The Government has given centre stage to its proposals to raise the standards of design and quality of new development.

The Communities Secretary’s 20 July Written Ministerial Statement gives a summary of what the changes to the NPPF are intended to achieve in terms of design:
National Model Design Code
In May 2021, 14 local planning authorities from each English region (remember them?) were selected to take part in a six month programme to test the NMDC, with a £50,000 budget each. Notwithstanding, the policy requirement to devise codes is already national policy.
According to the Government, the 14 local authorities are “generating valuable insight to help in the wider application of design coding nationally” and a further 10 pilot authorities are now sought.
The “Delivering a sufficient supply of homes” chapter now expressly refers to “places to be created” rather than to “development” and requires strategic policy-making authorities to:
“ensure that appropriate tools such as masterplans and design guides or codes are used to secure a variety of well-designed and beautiful homes”
It is these future design guides and codes that were the focal point of the Communities Secretary’s announcements on 20 July, particularly the policy that guides and codes should be based on local aspirations as established through effective community consultation. Speaking at Policy Exchange event, Robert Jenrick said:
“We are making beauty central to the planning system in a way it simply never has been, through changes to the National Planning Policy Framework and a new National Model Design Code, with communities taking the lead”.
The National Model Design Code has been published in two parts: NMDC Part 1 – The Coding Process and NMDC Part 2 – Guidance Notes.
According to the NMDC itself, its purpose is:
“to provide detailed guidance on the production of design codes, guides and policies to promote successful design. It expands on the ten characteristics of good design set out in the National Design Guide, which reflects the government’s priorities and provides a common overarching framework for design”.
The NMDC provides a comprehensive list of principles that councils should consider when formulating their own codes, with more detailed definitions and proposed parameters included within Part 2. The principles within the National Design Guide are to be taken into account too.
NPPF Design Updates
New paragraph 129 in the NPPF confirms that design codes can be prepared for entire areas or neighbourhoods, or for individual sites. It also makes clear that landowners and developers may take part in the preparation of design codes prepared by local planning authorities or neighbourhood planning groups and may also prepare codes for sites which they propose to develop. To carry weight in decision making no matter who prepares them,design codes must be developed in conversation with local communities, in order to reflect local aspirations. Where local codes are absent, the NMDC can be a material consideration.
As one might expect, Chapter 12 “Achieving well-designed places”, has been amended or augmented in several paragraphs.
As proposed at consultation stage, it states that all local authorities should prepare design guides or codes consistent with the National Design Guide or National Model Design Code – the consistency with these documents being the key element of change to revised paragraph 128 (previously paragraph 122). Previously the NPPF said “plans or supplementary planning documents should use visual tools such as design guides and codes”.
But the reference to supplementary planning documents has not disappeared, due to consultation responses which noted that the link between design guides and local planning policy was not clear enough. The NPPF confirms design codes and guides need to be produced either as part of a plan or as supplementary planning documents to carry weight in decision-making.
The emphasis on visual tools was removed after the January consultation draft stage, notwithstanding references to use of visual engagement tools in the NMDC. As before, the detail and degree of prescription within codes or guides should be tailored to the circumstances, with the NPPF now noting geographic coverage and scale of change should also be considered when devising guides and codes.
As to the degree of detail that codes should include, the NPPF continues to state that codes should “allow a suitable degree of variety”. The previous and consultation versions tagged on “where this would be justified” after “variety”, but this has been deleted and is not in the final version. This is a welcome change, particularly where guides would otherwise seek homogeneity, potentially stifling innovation and density changes.
The NPPF now gives significant weight to development that reflects guidance and policies and outstanding or innovative designs that “fit in with the overall form and layout of their surroundings”.
The latest amendments also call for development proposals that are not well-designed to be refused. This is slightly stronger wording than before, with the Framework previously stating that permission should be refused for development of “poor design” that does not reflect local design standards or codes.
Beautiful = a well-designed place
While ‘beauty’ or ‘beautiful’ has been inserted into the revised Framework and accompanying guidance, what this means locally will be informed by baseline studies and based on the ten characteristics of well designed and beautiful places as set out in the National Design Guide. These are based on the objectives for design set out in Chapter 12 of the NPPF and expanded upon within the NMDC. These bring together a range of established urban design principles such as built form (density, height and layout), movement, identity and public space which are to guide the development of local design criteria.
The Government has responded to criticisms and questions about the term beautiful:
“[…] this has been included in the Framework in response to the recommendations of the Building Better, Building Beautiful Commission. This should be read as a high-level statement of ambition rather than a policy test. The government would encourage local planning authorities, communities and developers to work together to decide what beautiful homes, buildings and places should look like in their area. This should be reflected in local plans, neighbourhood plans, design guides and codes, taking into account government guidance on design”. 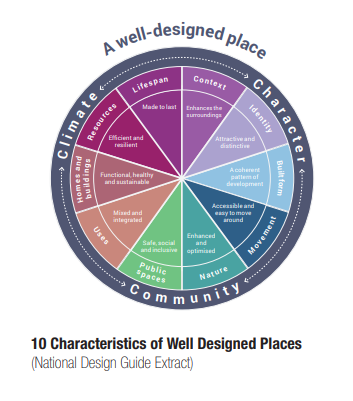 Street trees
The Government proposes to take forward the Building Better, Build Beautiful Commission’s recommendations for planning policies and decisions to ensure tree-lined streets; “unless, in specific cases, there are clear, justifiable and compelling reasons why this would be inappropriate” (footnote to new paragraph 131). Furthermore, opportunities should be taken to retain trees and/or incorporate trees elsewhere in developments. There should also be measures to ensure that trees are maintained post completion; it seems that this would likely be through conditions.

Building Beautiful Places, Written Statement, 20 July 2021[1]Article 4(1) of the Town and Country Planning (General Permitted Development) (England) Order 2015 says:“If the Secretary of State or the local planning authority is satisfied that it is expedient that development described in any Part, Class or paragraph in Schedule 2, other than Class DA of Part 4 or Class K, KA or M of Part 17, should not be carried out unless permission is granted for it on an application, the Secretary of State or (as the case may be) the local planning authority, may make a direction under this paragraph that the permission granted by article 3 does not apply to -(a)  all or any development of the Part, Class or paragraph in question in an area specified in the direction; or(b)  any particular development, falling within that Part, Class or paragraph, which is specified in the direction,and the direction must specify that it is made under this paragraph”