Rachel Clements, Harry Bennett & Isla Bowman 26 Apr 2022
Local plan making seems to be in a perilous state. A slew of local plans have been withdrawn, ‘shelved’, stalled, or are not taking on the feedback of local plan inspectors in recent weeks and months. One can look at this trend as symptomatic of the political and resourcing difficulties faced by the planning system. However, these delays have a real social and economic impact.

Who and why – the plan-making delay

In recent months, the following 11 authorities have either stalled, delayed, or withdrawn their local plans:
The emerging  hiatus in local plan preparations has been well covered (for example Simon Ricketts, Zack Simons, and a Planning Resource article). Many of the delays – particularity in the South East of England – are linked to the vexed issue of housing needs. There is a current uncertainty over how the Government intends to address the question of how many homes and where they should be provided, with rumours of a new local housing need methodology (or indeed getting rid of it altogether) which may (or may not?) reduce figures in constrained authorities in the name of ‘levelling up’. This comes on top of the perennial difficulties of planning in areas of Green Belt, uncertainty over potential changes to the planning system associated with the planning ‘White Paper’, and local political pushback on development.
Under a plan-led system, the delivery pipeline of new housing is to a large extent reliant on housing allocations made in the new local plans. If local plans are delayed, then so too are homes (as equally are commercial developments and infrastructure). Delayed homes are homes not available for purchase, rent or available to meet local affordable housing waiting lists. Delayed housing schemes also won’t generate wider economic benefits arising from their construction, household spend, and council tax receipts.

How many homes are caught up in the delay from these authorities?

To quantify the effect of these delays on housing supply and corresponding economic impacts, we have reviewed each of the 11 local planning authorities’ emerging local plans listed above (be that a Reg 18 or Reg 19 draft, or a recently withdrawn plan). For each plan we have calculated how much housing is (or was) proposed on new allocation sites and their expected contribution within each respective plan period. Of the 11 authorities, only eight had published a plan with specific allocations so our analysis is limited to these LPAs (and thus excludes St Albans, Sheffield, and Arun).
From our review, there are currently 69,161 homes held up in the system across these eight authorities; most of which are in Dacorum and the fewest in Castle Point. Assuming that each allocation would deliver policy compliant levels of affordable housing, this means there are at least 21,471 affordable homes held up[1]. This total figure does not include any windfall allowances as it is assumed such sites may well come forward irrespective of a new local plan.
An alternative way of looking at the impact is to compare the figures in the stalled Local Plans against recent rates of delivery, on the (optimistic) assumption these would continue absent an up-to-date plan. Each of the eight LPAs needs to try and prepare a plan that addresses a higher level of housing need than that for which they previously planned. Adopting this approach – comparing the ‘stalled plans’ against the rate of net additions over the past three years, the stalling of the plans means forgoing approximately c.40,000 homes. 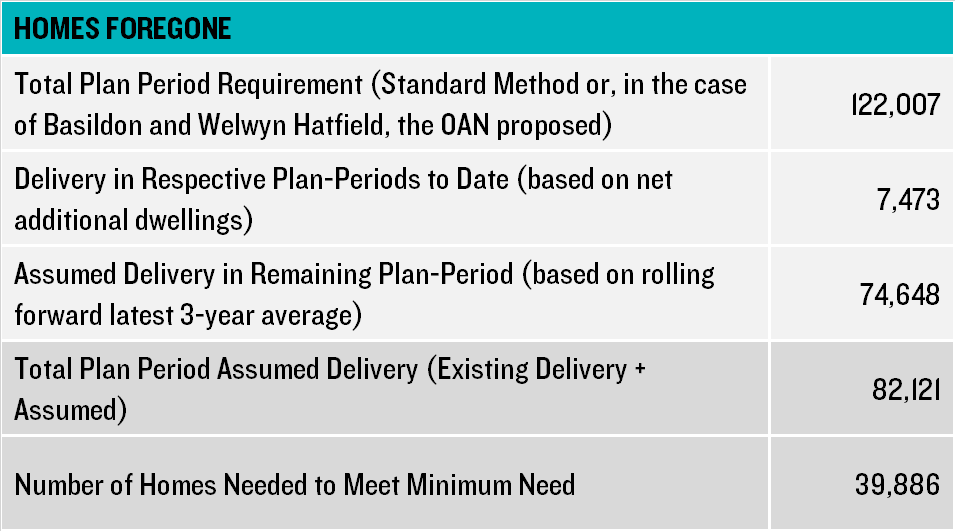 Of course, it may be that recent rates of completions cannot be sustained without new allocations. This is because past delivery will include delivery from past allocations that the emerging stalled plans were intending to replace; therefore, the 40,000 figure represents an optimistic estimate.

What is the economic impact of these foregone homes?

We have applied Evaluate – Lichfields’ economic benefit assessment framework – to each of the LPAs providing us with estimates of the economic benefits of the 70,000 homes in the proposed housing allocations. It does not capture the additional economic benefits from associated community infrastructure (i.e. schools and health centres), commercial development (retail and business uses), and green infrastructure associated with these allocations. For each LPA, we have applied a localised housing mix (taken from the relevant authorities SHMA) and assuming policy-compliant levels of affordable housing will be delivered.
The results of the analysis are set out in the table below. The near 70,000 homes have an estimated combined construction value of £10.14billion (at 2022 prices, calculated on the costs of each region the LPA is in). This level of investment would support thousands of direct jobs and indirect supply chain jobs with an annual economic output of £1.9billion (GVA).
For local economies, there will also be a particular hit as expected housing delivery no longer comes forward. In total, residents of these new homes would support over 9,000 retail and service jobs just by their expenditure. Not all of this expenditure will be ‘new’ as some existing local residents will move into these new developments; however, it serves to show the amount of potential spend is being held up which will be generated once these homes are delivered. Finally, for Local Authorities they are missing out on a significant quantum of Council tax. At today’s rates, once all these homes are built the eight Council will be missing out on nearly £146m per annum. This could be spent on maintaining and improving services across each Council area. 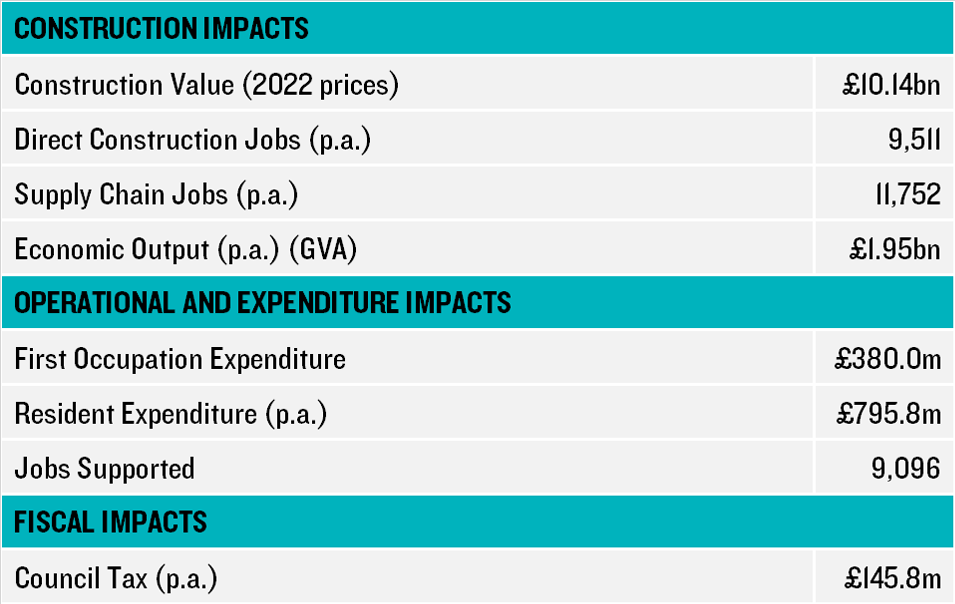 Taken together, the above shows some of the real costs of local plan delay from an analysis of just eight LPAs. It is only ‘some’ because we have not accounted for the additional benefits of commercial and other developments (which of course secure jobs which many authorities chase). Moreover, we don’t account for the wider social impacts of housing forgone. Each allocation represents social infrastructure – be it schools, health centres, community space, green space, sports provision – all not delivered. The consequences of households not forming, or people living in inadequate living conditions is a further cost.
Whilst one can readily recognise the realpolitik drivers of stalled local plans – and accept that the current system has notable imperfections – it also the case that many of the areas affected are among those with the worst problems of housing affordability in the country and in locations where new housing could help support revival of local high streets. Delays thus carry economic and social negatives that are real; harming existing and future residents. The scale of impacts from just eight local plans also points to the need to arrest the contagion and get the planning system moving again; if the system as a whole grinds to a halt, the adverse consequences will be of national economic significance.

[1] Where an LPA has a range, we have applied the lower figure.