Keeping up with the numbers: what does the proposed standard method mean in the Thames Valley?

Keeping up with the numbers: what does the proposed standard method mean in the Thames Valley?

Daniel Lampard & Bethan Haynes 01 Sep 2020
This blog is the latest in a series exploring the potential implications of the proposed standard method across England. See our other blogs on the South West, Yorkshire, North West, West Midlands and London. This blog is also an extended version of a blog originally published online in the Thames Tap.
The last week or so has seen most of us planners really beginning to fully digest some of the proposals set out in the Planning Reform paper and thinking about what impact they could have on the system and our country as a whole. It’s no surprise that the issue of housing numbers remains at the forefront of the proposed changes and the Thames Valley highlights some of the possible difficulties which could be faced in planning for housing in such a high demand area which is subject to significant constraints.

How did we get here?

The current standard method first appeared in the 2019 NPPF and assesses household growth and affordability (the ratio of prices to incomes, as of now) to generate a figure of ‘local housing need’. However, a judgment was still needed at the local level as to whether this need could be met in full, under NPPF para 11b ([i] and [ii]). After less than 2 years of being in place, Government has now decided that a refresh of the standard method is needed (read more about the background to these changes here), with some significant changes;
On top of all these changes, the standard method for assessing local housing need is now not the only step in the process. In due course, Government is set to publish housing requirements - a second stage where the numbers reflect not only housing demand (as indicated by the method for assessing local need set out in the proposals), but also land supply factors. But more on that later.

What does this mean in the Thames Valley?

These changes have led to some significant changes in housing numbers in the Thames Valley (see Figure 1 which compares the proposed method with the current method, and see the figures in full here).
Figure 1 – Difference between proposed new standard method and current standard method for local authorities in Thames Valley 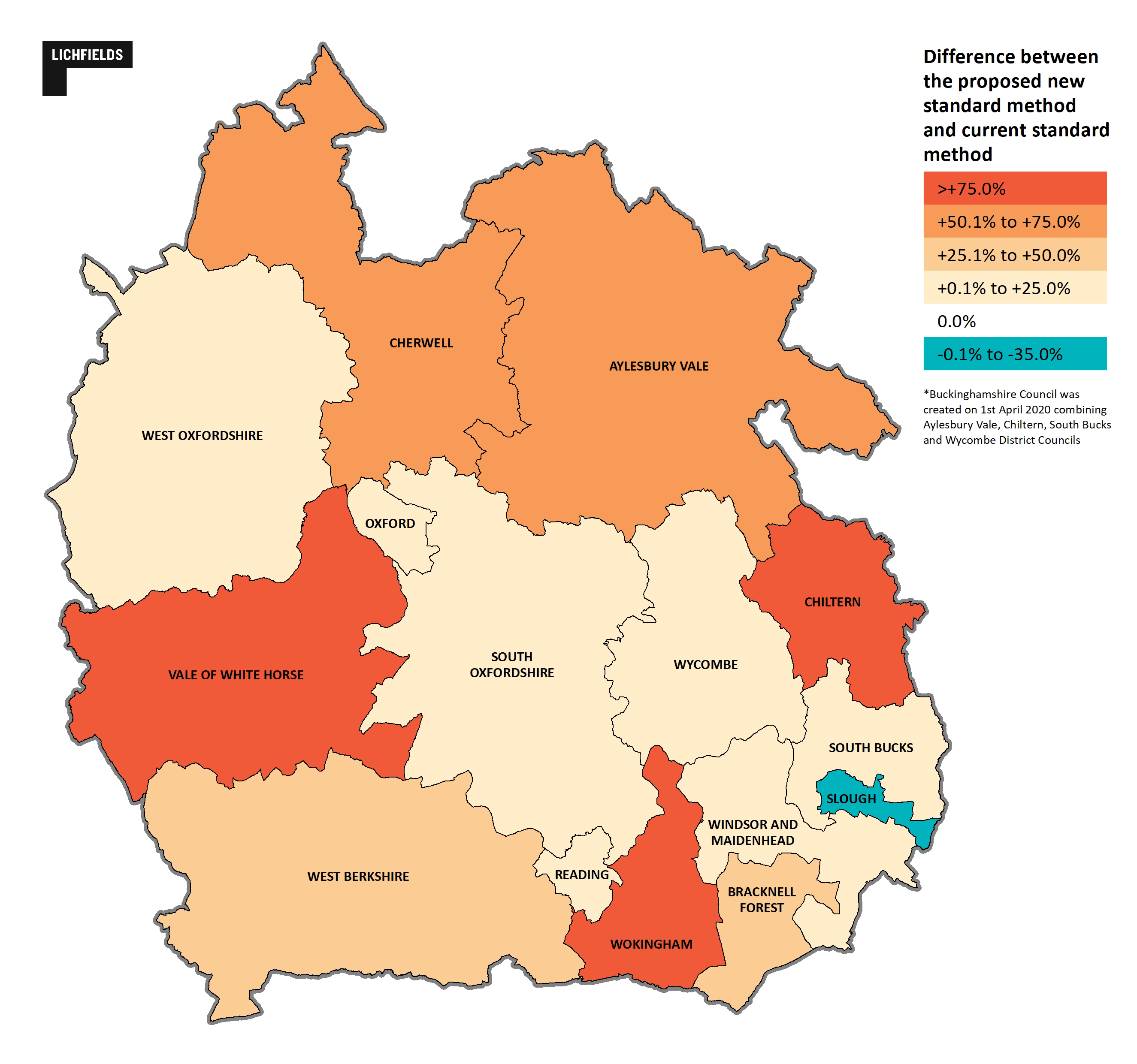 With every single authority in the Thames Valley seeing their affordability ratio worsen in the last 10 years (by an average of 43%), the increased emphasis on affordability in the proposed method has had a huge impact – every authority has a greater affordability uplift under the proposed method than the current method (see Figure 2). Under the current method, many authorities have an uplift of around 30%, with an overall average of 46% (albeit this is before any caps are applied). Under the proposed method, the uplift exceeds 100% (i.e. a doubling of the baseline) in virtually all areas, with an average uplift of 130%. Bracknell Forest has seen the highest increase in the affordability ratio up from 5.6 in 2009 to 9.3 as of 2019, which means it’s housing number is now subject to a 128% uplift, compared with just 33% under the current method. Similarly, the ratio in Reading has gone up from 6.4 to 9.1, increasing its uplift from 32% to 99%.
Figure 2 – Affordability Ratio (2019), uplift under current standard method and uplift under proposed standard method for local authorities in Thames Valley 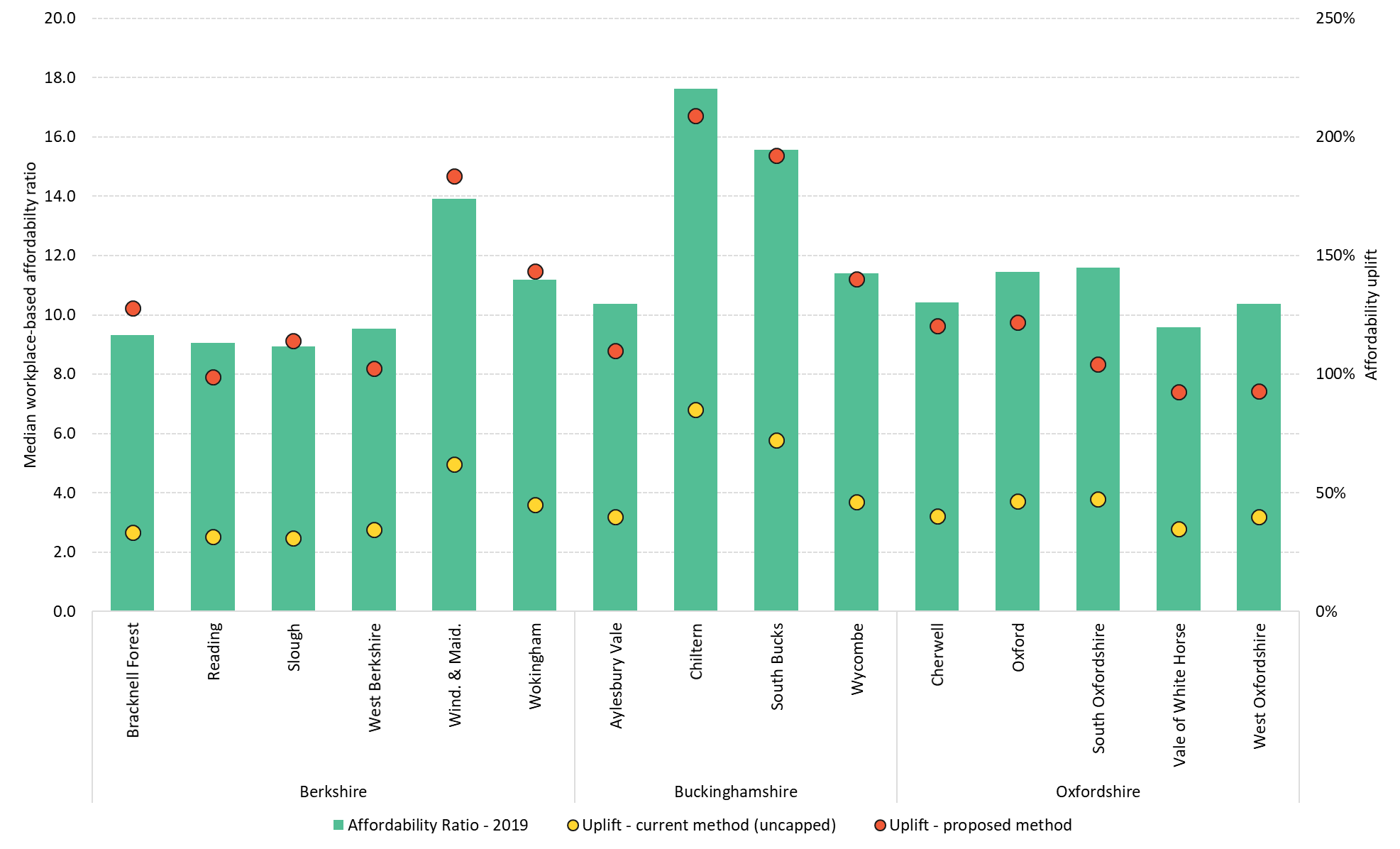 As well as more significant affordability uplifts, some authorities such as Cherwell, Vale of White Horse and Wokingham, have also seen their numbers increase because their baseline has increased. In Wokingham for example, the baseline in the proposed method is 672 (based on the 2018-based household projections) compared with 544 under the current method (2014-based). Under the current method, Wokingham’s figure of around 800 was not miles away from it’s current plan requirement of 662 (and still well below recent delivery which has been around 1,200 per year). Yet the current method still created something of a stir locally, with the Council seeking to argue ‘exceptional circumstances’ and put forward a number lower than the current method in its emerging plan[1]. With the proposed method doubling the number – from around 800 to over 1,600 – one can only imagine what the Council’s reaction will be this time around.

As part of one of most important economic sub-regions in the UK – the Oxford-Cambridge Arc - housing growth in Oxfordshire is a key part of economic success of the area and indeed the country as a whole. Understandably then, planners and commentators are keen to understand what the proposals mean for the county.
Oxfordshire is an interesting case; whilst the proposed method yields significant increases compared with the current method in every authority, the situation is perhaps not quite a severe as it seems. The Councils were already planning for an ambitious housing number, having agreed to deliver around 5,000 homes a year as part of the Oxfordshire Housing Deal (a figure also deemed necessary to support economic growth, as identified in the Oxfordshire SHMA[2]).
At the moment, some 4,000 homes a year are planned for in Local Plans across the county, but we can expect this to increase after South Oxfordshire adopts its plan and others review theirs to include Oxford’s unmet need. The current standard method yielded a somewhat unambitious figure of just over 3,000 per year, but because of plan progress in the county (combined with the Housing Deal) these numbers were largely meaningless – they were unlikely to lead to any reduction in housing targets in plans in Oxfordshire. The proposed method however is up at around 4,800 per year – remarkably in line with housing delivery seen in recent years (c.4,700) and also similar to the figure of 5,000 per year which is considered to be needed to support economic growth. So, despite the sea of ‘red’ across Oxfordshire in Figure 1 above (indicative of the increase between the current and proposed methods), the figures under the proposed method might not be such a shock to the system in the Oxfordshire authorities as a first glance suggests.

Slough is the only authority to have seen a decrease, and this is because of the lower baseline (279, compared with 659 under the current method). This means that, even with its greater affordability uplift, the number is still down compared with the current method (597, compared with 863). Although recent delivery in Slough has been strong, with an average of c.600 homes a year completed in the last 3 years (well above the local plan requirement of c.300 per year), with a limited and finite supply of housing land, it is questionable whether Slough can sustain delivery at a level to meet this figure.

What about the future?

Despite all of this, its important to remember that the proposals for the new standard method set out in the Planning Reform proposals represent only the first part of [what will eventually be] a two-step process. The proposed method as set out in the proposals generates a figure for local housing need, reflective of stock, household projections and affordability. But, there is a second part, which seeks to address a multitude of other factors; the size of existing urban settlements, the extent of land constraints, brownfield opportunities and demand for other (non-residential) uses. This would give the housing requirements that local authorities would need to plan for. At the moment, it is for Councils to assess to what degree they can meet their need, as far as is consistent with the NPPF (para 11b). In effect, Government would take over the task of doing this, giving authorities a number which also reflects land supply and constraints.
A simple task? Almost certainly not. There are clearly lots of factors to take into account (brownfield land supply, the extent of constraints, affordability pressures) which need to be carefully balanced against one other, and the circumstances in every single local authority in the country are different. The Thames Valley is the prime example of the difficulties in the balancing exercise; it contains some of the least affordable authorities in the country outside London, but yet many of these areas are almost entirely covered in areas the Government is seeking to ‘protect’ – Green Belt, AONB, etc. In Windsor and Maidenhead, for example, house prices are nearly 14 times local incomes, yet the authority is 84% constrained (based on Green Belt and NPPF footnote 6 constraints, rising to 99% if you once urban land is accounted for). Similarly, Oxford’s housing pressures are well documented and house prices are now 11.5 times local earnings, yet the authority is over 80% urban, and most of what’s left is constrained, meaning overall 98% of land is either constrained or already built on. There is certainly no ‘right’ answer to the question ‘how do we balance the demand for housing whilst also taking into account environmental, policy and physical constraints which exist’?
At the moment we aren’t sure how exactly Government will go about this crucial balancing exercise; it seems unlikely that some of the relevant factors can simply be totted up in a spreadsheet and applied in a formula (as Government has done with the standard method to date). And how quickly can it implement all this; we must remember that Government wants every authority to have a plan in plan by December 2023. In short, it needs to come up with these housing requirements, and quick. Councils, planners and local residents in the Thames Valley will no doubt be eagerly awaiting more detail on this next – and arguably crucial - step in the planning process.
For implications of what the New Standard Method means for other regions, see below perspectives:
London   |   North West   |   South West   |   West Midlands   |   Yorkshire and The Humber